All Students Must Come First - Funding Equity In Missouri 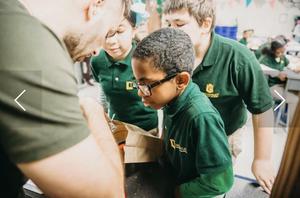 All Students Must Come First - Funding Equity In Missouri

We all believe that kids are more important than adults, mostly because adults can take care of themselves, and kids can’t. Unfortunately, that often works in reverse because adults have political power and kids don’t.

I see that a lot in education. We have public schools to teach our children the skills, knowledge, and civic values they need to be good citizens and pursue their dreams and ambitions. We are preparing them for life. Without an education, their chances of success are dim. We all know that.

I think we can all agree that all children in Missouri deserve a good education. None of them is more or less special than the other.

If we all acted like the students come first, and that every child is precious, our education public policy would be very different.

The kids in both district schools and charter schools attend public schools. All of their parents want a good education for their children. A child in a district school is no less important than a child in a charter public school, and visa versa. Unfortunately, a loophole in the law treats them differently when it comes to local tax dollars.

The issue is known in educational circles as “funding equity.” What it means is that some public school students receive less local government funding for their education than others— quite a bit less in some cases.

The loophole in the law gets a little complicated. But, it goes like this. Local taxpayers pay property taxes and sometimes sales taxes for public education. The students in the district schools get the actual amount those taxes bring in. But, the charter public school students get less, sometimes much less. They get the amount calculated in 2005. The amount of taxes generated by taxpayers in 2005 is much less than the amount paid today.

While the calculation is complicated, the result of this loophole in the law is not. A student who attends a charter public school in Kansas City and St. Louis gets at least $1,100 less per year for her education than a student who attends the local school district. $1,100 may not seem like much, BUT, multiply that by the number of students in the school and that is A LOT of money not being received. That is not equal, and it is discriminatory.

Some will argue that students, by attending a charter school instead of a district school, are taking resources away from the school district, and, therefore they should get less money for their education. Where you stand on that depends on what is most important to you: school districts or school children. If you believe the answer is our children, then I urge you to support a change in state law to #FixTheGlitch and close the loophole that treats some of our children as less important.

Even if I have not convinced you of the need for a change in public policy, I hope I have at least convinced you that we should put children at the center of education, and that every child matters. If we all agree on that— even if we disagree on some policy matters— our children and our state will be much better off.

To Support ALL Missouri Public School Children Text FixtheGlitch to 52886​​​​​​​