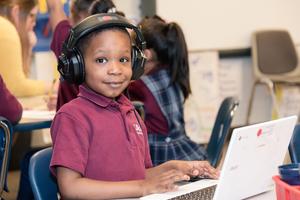 In Missouri, public schools are supposed to be funded equally, based on a certain number of dollars per student enrolled. This is designed to ensure that schools—and students—all receive an equitable share of the money Missouri spends on K-12 education. It isn’t working, but not because of any effort to make Missouri’s school funding unfair; inequitable funding is the result of a glitch in the way schools are funded and it can easily be fixed by the legislature.

The difference between traditional and charter public schools is that charters are governed by independent school boards whose only focus and responsibility is that particular school. This creates the ability to be highly responsive to the needs of students and families within a school. There’s no such thing as a one-size-fits-all education. Charter public schools give parents like us the freedom to find a school that fits our children’s needs, regardless of income or zip code. The “charters” that these schools operate under allows them to be closed or replaced for failing to reach specific academic and non-academic goals, or for failing to operate in a responsible manner.

The formula that Missouri uses to fund public schools is complicated – which makes it hard to talk about, even if the fix is relatively easy. This formula takes a lot of factors into account in an attempt to ensure funding equity. It provides more money per student to districts with relatively low property wealth; it provides more to districts with higher proportions of low income, special needs, and limited English proficiency students; it provides more money to districts with a higher cost of living, and it has “hold harmless” provisions to protect shrinking districts from receiving decreased funding. Despite all these efforts, the funding is still inequitable for half of the students in the states two biggest districts.

We are parents of public school students in Kansas City and St. Louis, and we both chose charters for the public education of our kids. We are not alone, and the success of charter public schools in Missouri has helped to turn the funding problem into a funding crisis.

The complex funding formula meant that when the number of families in Kansas City choosing public charter schools approaches the 50% mark, the students in those schools face an even bigger hurdle, since the percentage of charter school students became larger than the percentage of funding the state puts into education, and public charters don’t receive the same local funding as traditional schools which would otherwise help close the gap.

As parents of public school students, we aren’t asking for a tax increase. We’re asking for all Missouri’s public schools to be funded fairly. We know our kids aren’t receiving a fair share of resources, and no parent wants their kids to be treated unfairly. The legislature can fix this glitch and we urge them to do so.