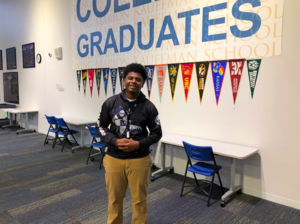 A senior at Ewing Marion Kauffman School in Kansas City offers insight into how high-quality education changes lives.
“I’ll look you up in the Jackson County jail system in a few years.”

When 12-year-old Kenny heard these words from his 8th-grade guidance counselor, he felt defeated, as if no one believed that he mattered or that he could one day achieve the goal so important to his mother: college. In fact, he didn’t really believe it himself. Up to this point, his experience in school had not been positive. He was behind in nearly every subject and tended to act out in class. Going to college or even finishing high school seemed beyond reach.

The “school to prison pipeline” is an abstract concept to some, but it is all too real for many young people like Kenny. Often, children, particularly low income, black students struggling with behavioral problems or issues with authority figures get caught in a cycle where misbehavior is met with low expectations, isolation, and missed class time. It is common for these students to experience feelings of low self-esteem, making it increasingly difficult to engage in school.

But fortunately, this is not Kenny’s story. The dire prediction that he would end up in jail emboldened him with a new drive and a mantra, “This will not beat me.” Kenny’s mother enrolled him in the Ewing Marion Kauffman School, a charter school in downtown Kansas City, where his little sister was already attending. He described his first few months as a “culture shock.” He was amazed at the structure and accountability he experienced at his new school. He was also surprised that a fellow student had been assigned to help mentor him. “I had never seen leadership from another student, and I knew I could be like him. I wanted to be someone others look up to.” It wasn’t easy, Kenny struggled throughout his first year. But soon, Kenny knew that he had found a learning community willing to help him succeed academically and he was growing into the type of person that would make his little sister proud.

But not Kenny. He, with the help of his family and his new school, has broken the pipeline. His former counselor will not find him in the Jackson County jail system. Not at all. Kenny has his sights set on a degree in Broadcast Journalism and plans to attend college next fall. “I can do anything I put my mind to,” Kenny said, “and I know I have a team behind me to help.”